Garnet is often thought of as red, but these gemstones come in almost any color and are popular for jewelry of all kinds. If you want to buy this January birthstone, that’s great news. In the gem world, the garnet family is one of the most interesting. It’s not a single species, but rather a group of different species and varieties that make it up.

Will focus on the things that all garnets have in common and give a quick overview of how different they are. Garnets are not like minerals like beryl or corundum, which are all the same species but have different colors because of trace elements. They come from different species and are never found in their pure state. They are always mixed with other types of garnets, and they are never alone. They are called solid-state series or a blend because they are made up of different minerals. Some of these blends have unique features and are known as different types of garnets in their own right. What makes them all garnets is that they all have the same crystal structure and the same properties. 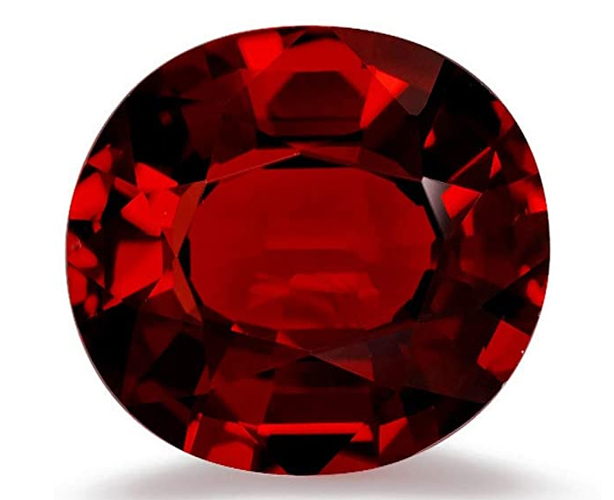 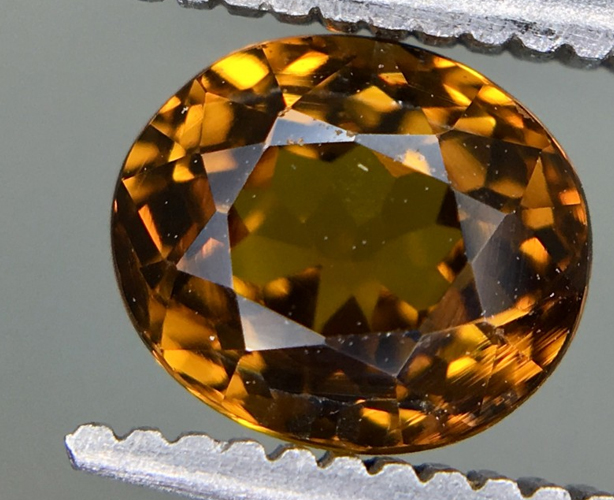 There are very few andradites in the world, and they are one of the rarest. They have the most dispersion out of all garnets, with even more fire than diamond. Demantoids, a type of andradite, are very valuable. 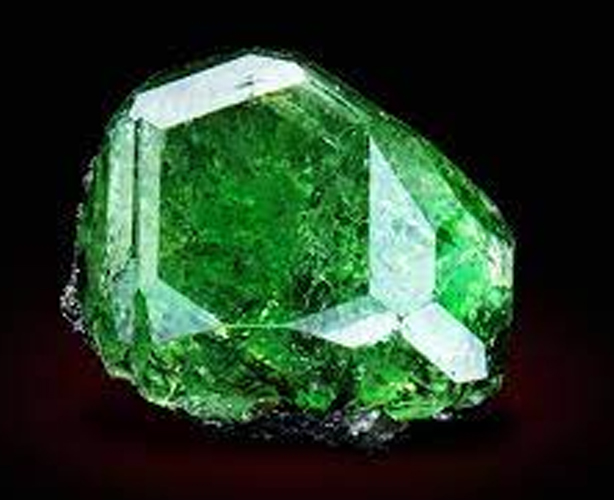 It is very rare for grossulars to be red or dark in color. However, they come in every color, even white, except blue. Their light to medium tones and bright colors make them great for making jewelry. Tsavorites have an emerald-like green color and can be sold for a lot of money. Hessonite “cinnamon stones,” on the other hand, are very popular and cheap. 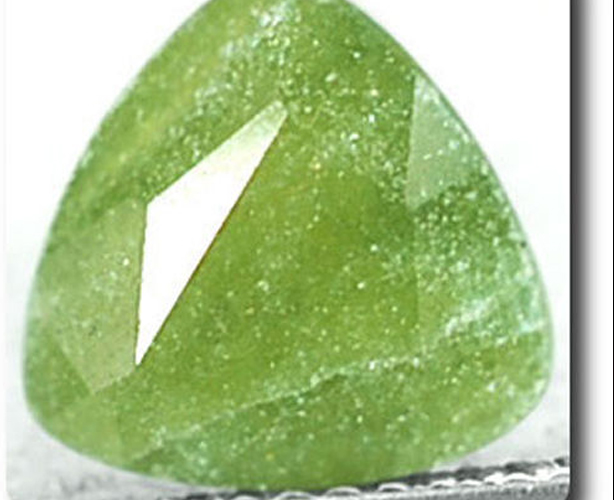 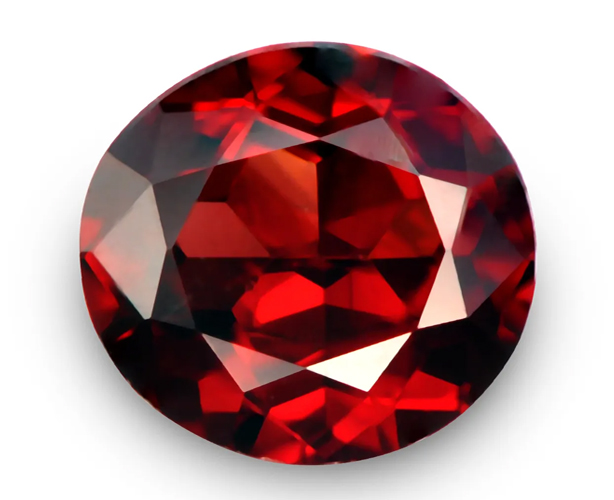 There is a red color in chrome pyropes that can match rubies. There are some dark stones, though. 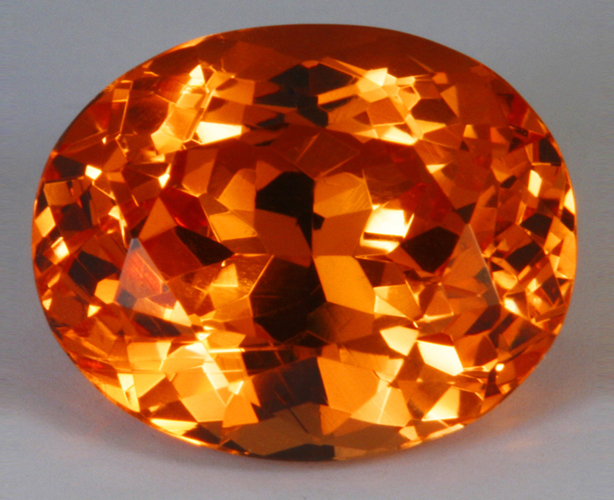 Spessartites, also known as spessartines, are a type of garnet that isn’t very common. They come in a lot of different shades of orange. Mandarin garnets, a type of spessartite with a bright orange color, are very popular. 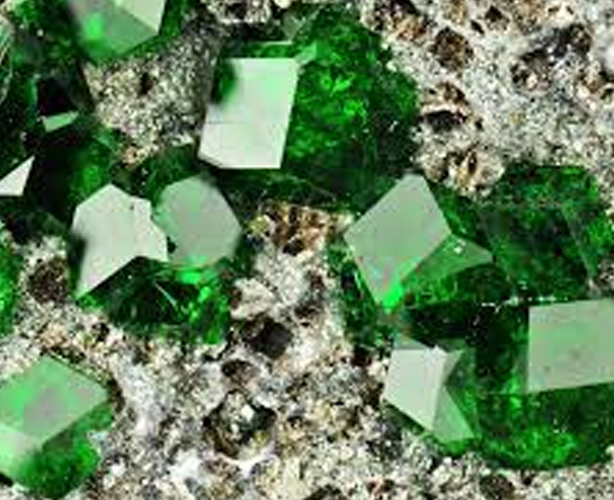 Uvarovites are the rarest member of the garnet family. They have a dark, rich green that looks like an emerald, and they are very rare. Facetable material is even rarer and always small.

Blends
Some people assume these blends are types of garnet, not sub-types of the above species. 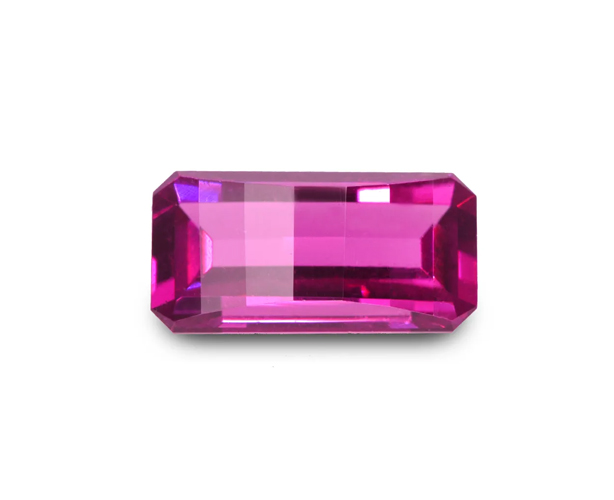 Rhodolites are a mix of pyrope and almandine that have a purple color. 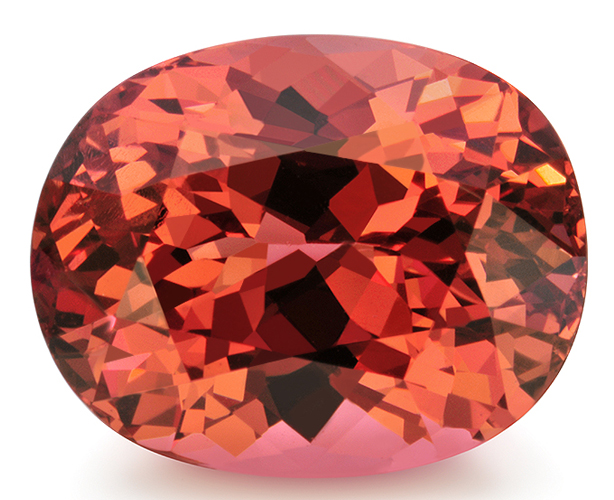 In the past, this term was used to describe garnets that didn’t fit into any other categories. Now, gemologists know that malaya or malaia garnets are a mix of pyrope and spessartite, and they call them that. 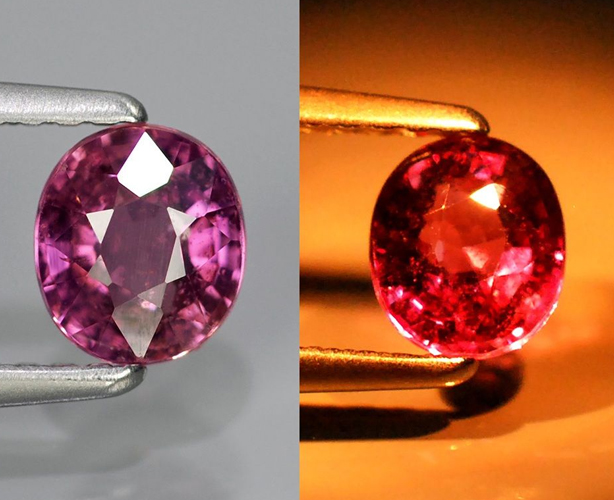 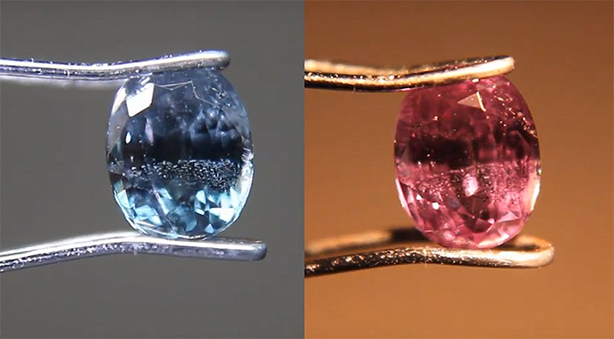 Color shift garnets, which turn blue when exposed to artificial light, have been identified in recent decades. Blue garnets with purple flashes under incandescent light were discovered in Madagascar in the late 1990s. A pyrope-spessartite mixture makes up these color-changing stones. A dramatic color shift from red to purplish red can be seen in some Idaho garnets. These are a mixture of almandine and pyrope.

The following species are known to blend: 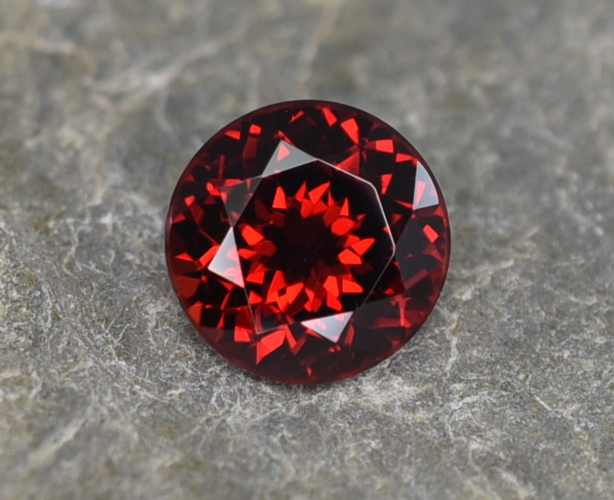 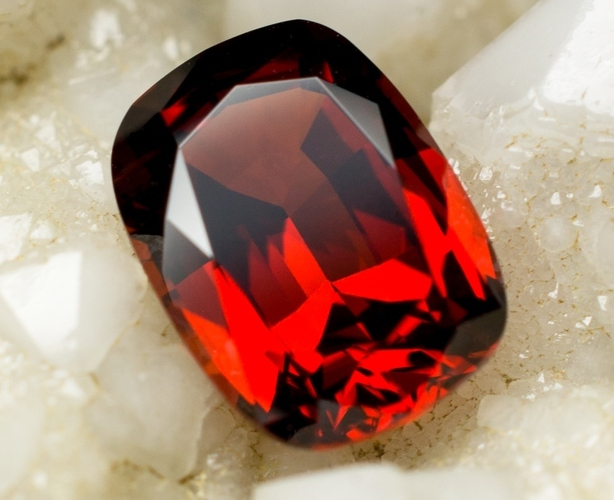 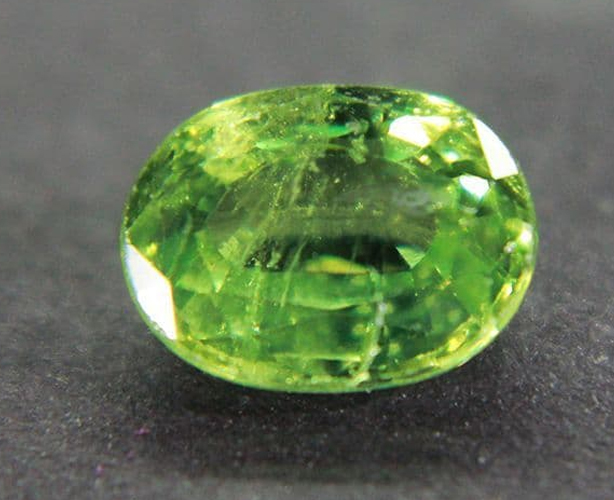 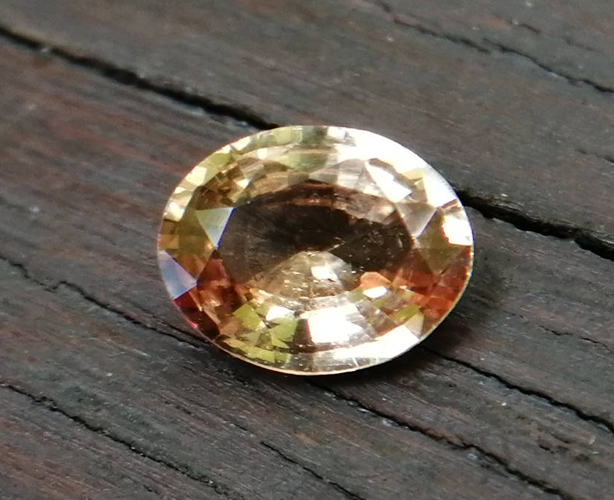 Garnet identification is difficult. Several new blends have been discovered in East Africa in the last fifty years. There’s no reason to suppose that all of the conceivable combinations have been found. We don’t know where gemologists will go in the future.

Garnets have a lot in common at the molecular level, despite their differences. For those who aren’t interested in science, here’s a visualization that, while not scientifically sound, can assist illustrate the point. If your hand were a model of a garnet molecule, the arrangement of atoms represented by the palm would be shared by all garnets.

The atoms represented by your fingers, on the other hand, are interchangeable. To put it another way, various atoms can live on your fingers while the palm stays the same. Any time the chemistry is altered, a new species emerges. Even if the structure and related features of a finger stay the same, changing the atoms produces a distinct species (or very nearly so).

The chemistry of garnets, of course, varies significantly more than the hand model can fully reflect. The chemical composition of the gem garnet species is shown below.

As you can see, chemistry comes in a variety of forms. Despite this, they all have a similar core structure. In the isometric system, garnets crystallize. The trapezohedron and dodecahedron are the most popular shapes. Surprisingly, they are rarely found in the shapes of cubes or octahedrons, which are the most prevalent shapes of other isometric minerals. Garnets come in a variety of sizes and shapes, including enormous, granular, and tumbling pebbles.

Rhodolite has been described as one part almandine and two parts pyrope by gemologists for decades. Garnets, on the other hand, are not so straightforward. Rhodolite stones, like all other garnets, contain some of the other species as well.

Garnets are never as simple as having two elements, even if they are present in trace proportions. Furthermore, a solid-state series such as an almandine-pyrope blend does not imply that it is a mixture, Fe3Al2Si3O12 and Mg3Al2Si3O122. Instead, it denotes the presence of both Fe and Mg in the structure.

Are There Any Pure Garnets?
Garnets do not originate as a single pure species in nature. Roughly 83% pyrope, 15% almandine, and about 2% different garnets were found in the purest gem-quality pyrope ever discovered. Almandine and grossular are in the same boat. You’ll find that 80%  is about as pure as it gets. Andradite and spessartite garnets, on the other hand, have been discovered to be up to 95% pure. There have been discovered non-gem-sized, colorless garnets that are 97% pure pyrope. It’s something to inspire garnet (or purity) lovers.

The almandine-pyrope and pyrope-spessartite series of garnets were once thought to constitute a straight-line sequence. However, this is insufficient to explain the increasingly complex mixtures we see.

A two-dimensional graph with almandine, pyrope, and spessartite marking the three corners is a more helpful description.

The chemistry of a gem is almost never found on one of the flat sides. It’s actually a point inside the triangle that indicates how much of each ingredient is present.

A three-dimensional model is optimal for total accuracy. Andradite, grossular, and uvarovite can all be added to the formula in this way.

Grossular and andradite are found in practically all garnet blends, however they are less prevalent. This graph can be used to show how much of each of these species is present in a single specimen.

Understanding garnet mixes is crucial for gemologists. The mixes of today’s garnets show a great deal of variation. Unless it’s a popular variant, garnets are usually named after their two principal species for identification purposes. Simply put, garnets are not simple two-species minerals.

Optics
Chemistry has a big role in these qualities. Isotropic minerals include pyrrope, almandine, and spessartite. Uvarovite, grossular, and andradite, on the other hand, are birefringent due to the big Ca (calcium) atom. This could be due to strain, but it’s more likely owing to structural issues. Under the microscope, grossular and andradite are almost invariably zonal, often twinned, and clearly not isotropic.

Color
Due to garnet’s tremendous range of overlapping colors, gemologists can’t identify this gem on the basis of color alone. This information is for reference only.

Andradite: yellow-green, green, greenish brown, orangey yellow, brown, grayish black, black. The color is related to the content of Ti and Mn. If there’s little of either element, the color is light and may resemble grossular.

The gem world has been influenced by synthetic garnets. Synthetic garnet was the dominant diamond simulant prior to the introduction of cubic zirconia (CZ) in the late 1970s. These synthetic stones are still available, albeit in a reduced quantity in today’s market.

The first synthetic garnet available on the market was YAG, or yttrium aluminum garnet. YAG is colorless in its purest form. It may, however, be made in practically any hue. The vast variety of refractive index and specific gravity is due to the dopants employed for coloring. Each property has a colorless YAG near the bottom. YAG is not brittle and lasts a long time. However, for a diamond equivalent, its dispersion is a little modest.

Gadolinium gallium garnet, or GGG, has a wide dispersion (.038). Yttrium is substantially more expensive than gadolinium and gallium. GGG, on the other hand, is a fantastic alternative, with a dispersion similar to diamond (.044). The coloring dopants, like YAG, are responsible for the wide range of refractive index and specific gravity.

Each attribute has a colorless GGG near the bottom. CZ, which is less expensive, has mostly supplanted GGG in jewelry today. These synthetics, however, are still available in a variety of colors. Many lapidaries choose them because they cut lovely jewels.

Enhancements
Proteus was a shape-shifting sea god in Greek mythology. His name now has the meaning of someone who can alter their appearance or principles quickly. The only garnets that are frequently handled are those known as “Proteus garnets.” Proteus will be created from a few almandine-pyrope diamonds from the United States.

All of the other personalities are resistant to change. A thin layer of metals is applied to the stone’s surface during this treatment. It takes on a twofold appearance as a result of this. Proteus garnets feature a dark gray, metallic sheen in reflected light, similar to hematite. The dark red shows through in transmitted light.

Stone Sizes
Garnet crystals are typically tiny, ranging in size from microscopic to around 6 inches in grossular. Many deposits are made up of tiny crystal grains embedded in or on the host rock. Garnets in granite with poor outward shapes, such as the almandine from Gore Mountain, New York, which has a diameter of 60 cm, can be much larger.

In Brazil, a few spessartites weighing several pounds have kept their clarity and exquisite color. These are, however, quite rare. A garnet crystal typically measures half an inch to an inch in diameter.

Care
Garnets should be cleaned with warm water, soap, and a soft brush. Garnets, despite their hardness and toughness, are heat sensitive. Excessive heat should be avoided.