“Emerald by day, ruby by night,” alexandrite is well known for displaying one of the most remarkable color changes in the gem world.

green in sunlight and red in incandescent light.

However, the modern June birthstone is so rare and expensive few people have seen a natural alexandrite.

This variety of gem-quality chrysoberyl makes an excellent jewelry stone.

First, the closer the colors to pure green and red, the higher the value.

Second, the more distinct the color change, the higher the value.

Alexandrites can exhibit everything from 100% to just 5% color change.

Thus, the most valuable gems would have a 100% color shift from pure green to pure red.

As is the case with a majority of gems, most naturally occurring alexandrite isn’t clean, facetable material.

Most is best suited for cabbing.

However, an alexandrite’s color change has more effect on its value than its clarity.

One gem is eye clean, with a 50% greenish blue to brownish-red color change.

The other is an opaque cabochon with a 100% green to red color change.

The opaque cab would be considered more valuable.

You can see this reflected in our Price Guide below.

In sizes up to one carat, top-quality natural gems can sell for up to $15,000 per carat.

Alexandrite was discovered in the Ural Mountains of Russia in the 1830s.

Noted mineralogist Nils Gustaf Nordenskiöld was the first to realize this unusual green, the color-changing gemstone was something new.

In 1834, Count Lev Alekseevich Perovskii named the stone in honor of the then-future Czar of Russia, Alexander II.

This connection to the Czars likely helped the gem gain prestige by association.

In the 19th and early 20thcenturies, as historian David Cannadine notes, the Czars were widely considered the standard for royal pomp. (More recently, the British Royal Family has enjoyed this position).

A combination of beauty, celebrity, and rarity helped create a mystique around this gem in the public imagination.

By the 1950s, alexandrite joined the list of birthstones as the modern alternative to June’s traditional pearl.

How Rare is Alexandrite?

If not for alexandrite’s popular associations, the circumstances necessary for its formation, combined with its mining history, might have ensured the gem would be little known as well as extremely rare.

To form, alexandrite requires both beryllium (Be), one of the rarest elements on Earth, and chromium (Cr). (Emerald also requires these two elements).

However, Be and Cr rarely occurs in the same rocks or in geological conditions where they interact.

Furthermore, the original source of alexandrites was almost exhausted after only a few decades of mining.

Since the 1980s, more sources have emerged. Nevertheless, alexandrite remains one of the rarest gemstones. Alexandrite is a variety of the gem species chrysoberyl, well-known for its chatoyancy or “cat’s eye” effect when cabbed.

As members of this species, alexandrites can also show a cat’s eye effect.

However, such gems are quite rare.

The color change gemstone phenomenon can occur under a variety of lighting types.

When grading an alexandrite’s color change, gemologists consider the stone’s color in natural sunlight as the baseline.

Thus, the classic alexandrite color change is green in sunlight and red in incandescent light.

However, other types of lights can produce other colors, as shown below. 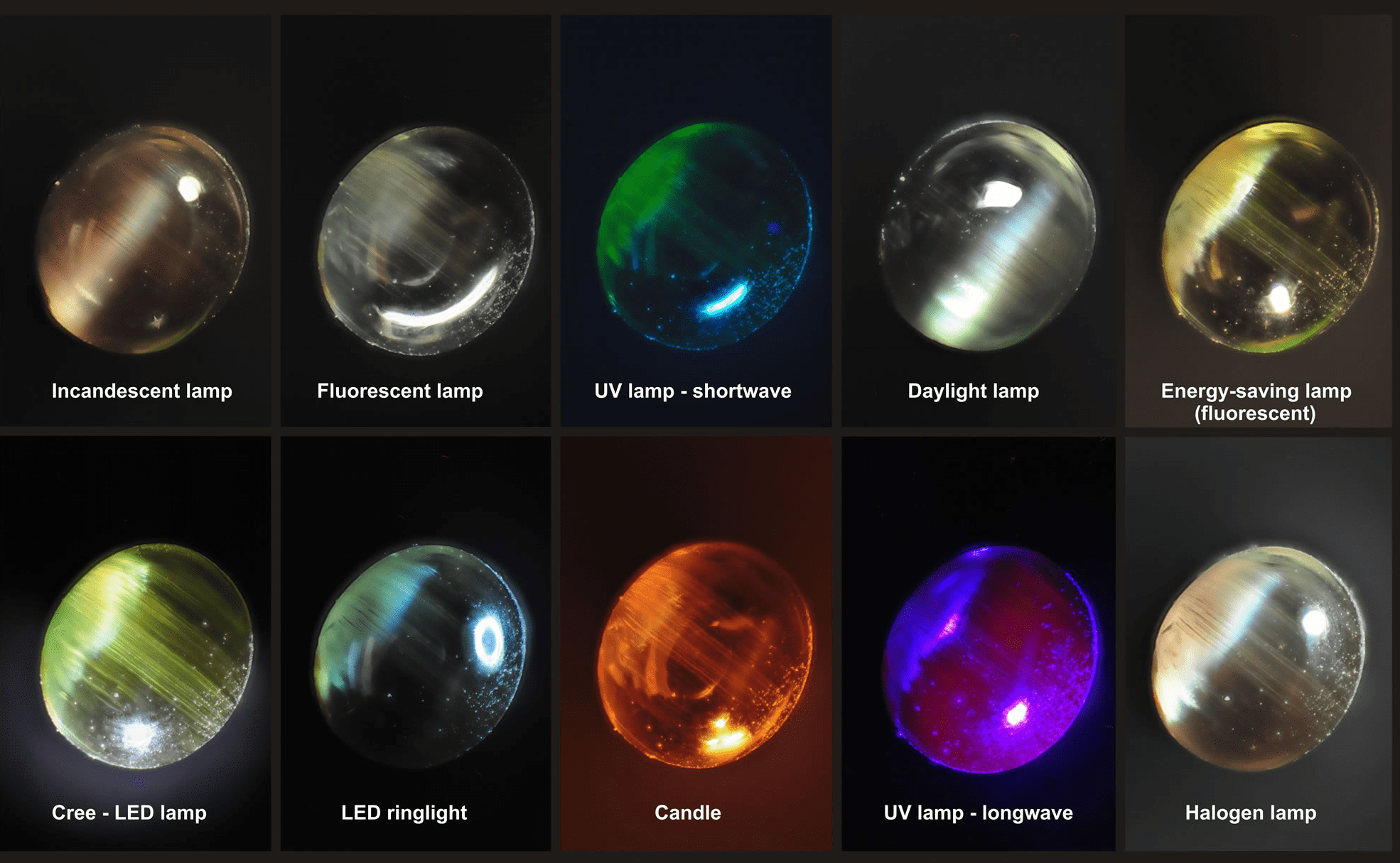 However, finer gems have been found recently in limited quantity.

Zimbabwean gems show a fine, emerald-green color in sunlight but are usually tiny.

If clean, they weigh under 1 carat. The color change in Zimbabwean gems is among the best known, but large, clean stones are virtually unobtainable from the rough from this locality.

Other physical and optical properties of alexandrites vary according to their source.

A considerable market exists for lab-created alexandrite, first synthesized in the 1960s.

Manufacturers can grow alexandrites through melt, hydrothermal, or flux methods.

These synthetic stones have the same chemical and physical properties as natural alexandrites.

They are real alexandrites but not natural.

Although the synthetics cost far less than their natural counterparts, they still rank among the most expensive synthetic gemstones available.

Melt techniques, like the Czochralski method, can create curved striae.

Flux methods can leave inclusions of platinum or other seed materials.

A considerable market also exists for lookalikes or simulants.

These gems also command a high price, but, again, not nearly as high as alexandrites.

A professional gemological laboratory can make a determination.

Mines in the Urals have re-opened but only produce a few carats of gem-quality material each year.

In 1987, alexandrite was discovered in Brazil and later in Madagascar, Myanmar, Sri Lanka, and Zimbabwe.

However, none of these sites produce as rich and vivid a color change as the original Russian source.

However, the vast majority of alexandrites weigh under one carat.

Other alexandrites of notable size included in the following:

With a hardness of 8.5, alexandrite makes a very durable stone suitable for any jewelry setting.

Alexandrite is still sensitive to knocks and extreme heat.

These gems have no special care requirements.

You can clean them mechanically, per the instructions of the system used.

Of course, you can also wash them with warm, soapy water and a brush.