WHAT IS GEMSTONE CLARITY?

Clarity is used to reference the purity of a gemstone. The grades are based on the evaluation of internal and external characteristics, and they are called inclusions inside the stone and blemishes on the outside. What these do for in regard to clarity is: inclusions will create an interruption in the path of the light through a gem, resulting in a superior performance. There are inclusions which reach the surface of the stone.

There are three states in which inclusions occur: solid, liquid or gas, although the latter is a rarity. Inclusions can very a desirable trait in certain types of gemstones.

There are three types of classification for colored gemstones. This is because of the variety of different colors, shades and tones which can be found in gemstones across the globe.

Type 1 gemstones are usually found without any inclusions. These include beryl gems, such as heliodor, aquamarine gemstone and morganite. They are usually ‘eye clean’, which means there are no inclusions visible with the naked eye. Jewelers will rarely use Type 1 gemstones with inclusions, unless they are used in such a mounting that conceals the flaws.

Type 2 gemstones usually have inclusions but are found to be eye clean rather than loupe clean as Type 1 gems often are. Type 2 gemstones include amethyst, andalusite, alexandrite, garnet and peridot amongst others. It is worth noting that tourmalines are included in this type, except if they are green, pink or watermelon. The same applies for non-blue zircon. Some eye clean stones are included in this type, but less than Type 1 gemstones. Type 2 gemstones with minor visible inclusions are often used in jewelry, especially sapphire and ruby. 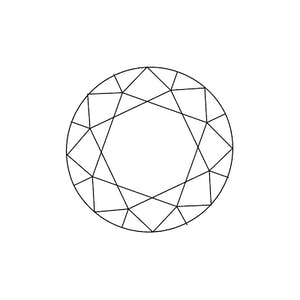 They are loupe clean and free of inclusions. However, there is a grade above this when talking about diamonds. Diamonds can also be Flawless. So, what is the difference? A diamond graded as internally flawless shows no inclusions under 10x magnification, but there are blemishes on the surface. On the other hand, for a diamond to be considered flawless, a trained eye must not observe any inclusions or blemishes under a 10x magnification. The easiest way to describe the difference in that Flawless diamonds show NO blemishes on the surface of the stone and no inclusions inside, meanwhile Internally Flawless diamonds have no inclusions, but do show blemishes on the surface. And that is why the grade receives the name Internally flawless, because the inside of the stone is perfect, but the outside shows some blemishes. In regards, to colored gemstones, Internally Flawless is the top grade you can find, as finding a colored stone without blemishes is extremely rare. Even rarer than a flawless diamond. There are examples of flawless Emeralds, but their rarity means their price is significantly higher than any other type of emerald. Furthermore, darker colored stones such as garnet or blue topaz can have deeper inclusions because their depth of color is able to hide the flaws in the stone. Meanwhile, lighter colored stones have more trouble disguising flaws under a rich color. 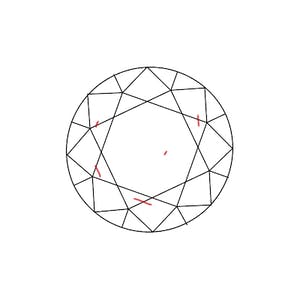 Almost loupe clean Gemstone Clarity. There are slight inclusions that can only be seen with strong magnification. Within the VVS category, sometimes also called Eye Clean or EC, there are different grades too. It ranges from inclusions extremely difficult to see under 10x magnification to very difficult to see under the same magnification. Some dealers include Type 2 colored gemstones in this grade. Type 2 colored gemstones also have no visible inclusions to the naked eye, thus being eye clean and that is why they believe deserve to be here. In reality, an eye clean ruby (Type 2) would be classified as VS if a dealer is to stay true to the GIA’s definitions. When grading the clarity of a diamond, these types of inclusions are what a grader will find: Needles, pinpoints, internal clouds or graining that are only visible through the pavilion and are extremely difficult to see under a 10x magnification. These are called VVS1 If the same inclusions as a VVS1 are easier to see, I.E very difficult but not extremely difficult, they are called VVS2. Small surface reaching inclusions will also class a diamond in this grading. Inclusions such as a chip, cavity, feather, bruise, bearding or indented natural.

These are usually eye clean stones. They have slight inclusions visible to a trained eye or under magnification. Here is where a dealer would include Type 2 colored gemstones, assuming the dealer is correctly identifying the gemstones and classing them in the correct grade. Diamonds graded under VS contain minor inclusions ranging from difficult (VS-1) to fairly easy (VS-2) to see under a 10x magnification. There are different types of inclusions possible, but they must be very small in relation to the size of the stone in question. The typical inclusions found in VS grade diamonds are crystals, knots or distinct clouds, some minor surface reaching inclusions such as feathers or cavities. There are also rare cases where a large VS gem contains eye-visible inclusions, as the grading is based on inclusions relative to the size of the gem. 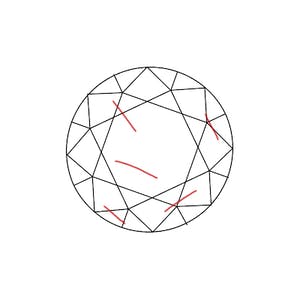 These inclusions are noticeable and can be seen with a naked eye. This means they drop into a commercial quality. The inclusions are noticeable with a 10x magnification, but not always visible with the naked eye. However, next to fine jewelry, an SI stone will appear cloudier and have a dimmer shine than the better graded stone. In the SI grade you can find SI-1 and SI-2. SI-1 have less noticeable and fewer inclusions that their SI-2 siblings. The inclusions in both types tend to be medium in size and can be found anywhere on the stone, but they are normally more centered inclusions. The number of inclusions in both types is also variable. There is no rule saying it has to be one inclusion or several. Typically, it is one inclusion setting the grade rather than a variety of small ones. The most common inclusions in SI-1 gems are crystals (black or white), feathers, knots, needles, cavities or clouds, among others. In SI-2 these same inclusions are more noticeable or visible, either because of their size or quantity. SI diamonds are a good offer for consumers looking for a quality stone under a certain budget. An SI diamond or colored gemstone can cost significantly less than the same gemstone with a VS grade. This means SI-1 graded stones are in high demand, as it allows buyers to focus on the other three C’s.

These Gemstone Clarity have inclusions with can easily be seen with the naked eye. This is where the Type 3 colored gemstones would reside. Some may fall into the previous category of SI, but many should be graded here due to their visible inclusions. Buying colored gemstones of this grade isn’t necessarily a problem, as many stones such as Emeralds or Mozambique Ruby have the color and hues to mask inclusions in their deep and strong shades. However, in diamonds, it is never recommended to buy a stone with this grade. The inclusions can affect durability, shortening the life of your stone, wear ability, meaning it can’t be worn daily in case it gets damaged, as the inclusions make the stone more susceptible to cracking or breaking. 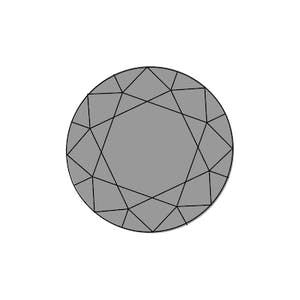 These gems allow light to pass through but are not transparent. It is not only the color of the stone that causes translucency. There are stones that are naturally translucent, but in the case of the grade scale this refers to stones that have such a high number of inclusions or blemishes that are highly visible they stop the light from passing through the stone. Emeralds are naturally a Type 3 colored gemstone. That means they are naturally blemished and flawed. If you were to compare two stones, one being a higher quality stone with less inclusions and the other being highly flawed, you will see a visible difference in brilliance. That means how each stone shines as light passes through. The high quality stone will be brighter and more attractive, while the lower quality stone will appear dull. That is what translucent means in terms of grading a gemstones clarity. 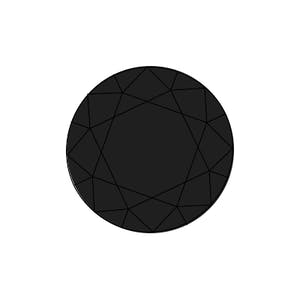 The stone allows no light to pass through. Stones such as cabochons are naturally opaque, because they don’t let any light shine through. What they do is reflect the light. A well-cut cabochon will reflect light evenly as you slowly rotate it in your fingers, whereas a lower quality cut will make the light snake across the surface. In grading the clarity of a gemstone, the term opaque means the stone will hardly shine at all when light is passed through it. The example of the cabochon shows how light still reflects of its surface, despite being opaque, and thus showing a better quality cut. Naturally opaque stones do occur; however, they tend to be lower in price. Meanwhile, stones that are so flawed they are opaque rarely have any market value.